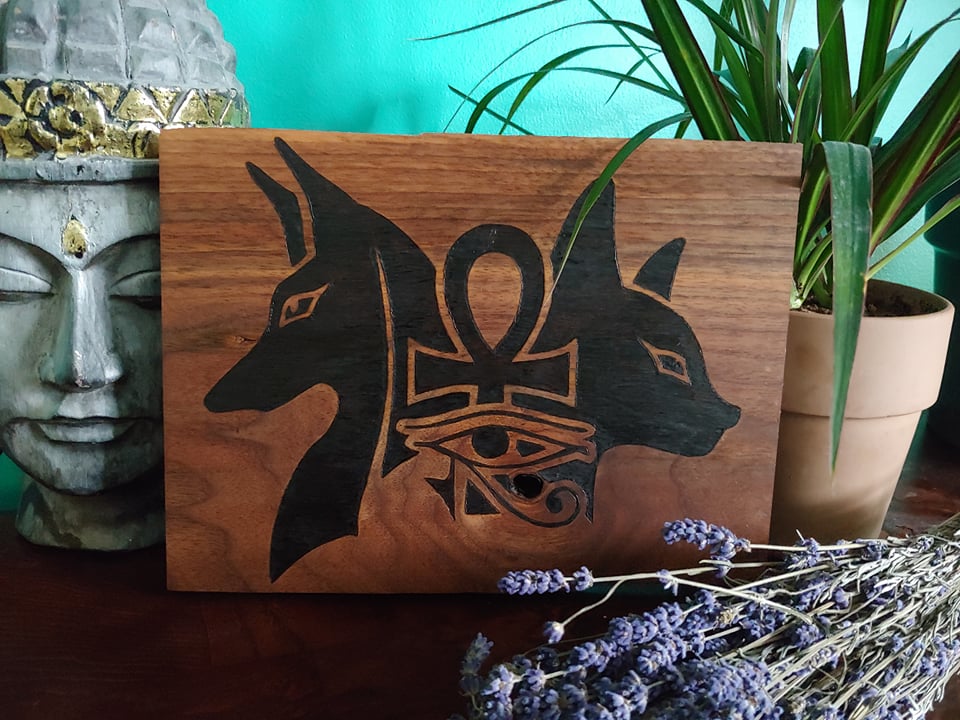 *Made to order – Allow 2-3 weeks production before shipping*

This Anubis and Bastet wood burning was 100% burned by hand (no laser engraver, or computer guided systems are ever used) on a piece of dark walnut wood.

Anubis is known as the “Lord of the Necropolis“. According to Egyptian mythology, the main mission of the Egyptian god Anubis was to bring the spirit of the dead to the other world or the Duat (the realm of the dead according to mythology.) Anubis is the Greek name for the guardian of the tombs and is associated with death and life after death in the religion of ancient Egypt. Anubis is also described as the patron of embalmers and is depicted as a large black canid lying on his stomach, possibly a jackal or a wild dog. The ancient Egyptians believed that Anubis has strong unique power over their physical and spiritual being in the afterlife.

Bastet is the Egyptian goddess of the home, domesticity, women’s secrets, cats, fertility, and childbirth. She protected the home from evil spirits and disease, especially diseases associated with women and children. As with many deities in Egyptian religion, she also played a role in the afterlife as a guide and helper to the dead although this was not one of her primary duties. She was the daughter of the sun god Ra and is associated with the concept of the Eye of Ra (the all-seeing eye) and the Distant Goddess (a female deity who leaves Ra and returns to bring transformation).

What a beautiful addition to your décor or altar space!

*Note – Wood appearance may differ from pictures, but the same wood species will be used.

There are no reviews yet.

Be the first to review “Anubis & Bastet on Walnut” Cancel reply